A relatively new DCC standard to implement return messages from a train/decoder. It was originally developed by Lenz, and is now a NMRA standard. Further development is in progress by European companies, and this extension is called RailComPlus.

RailCom works by having the command-station/booster stop driving the rails between DCC packets, during the inter-message idle packets, and then the decoder generates a 20 mA serial encoded signal. This is decoded by the command-station and/or other RailCom decoder(s).

RailCom/Plus allows: the identification of unknown trains; block occupancy; transmission of train information, such as its actual speed; and more efficient 'on-the-main' programming. See: NMRA standard and ESU RailCom Plus.

The process of converting alternating current (AC) to direct current (DC). most offten using diodes. The diodes are commonly arranged in a set of 4 combined in one package. See also “Bridge rectifier”.

The contacts of a reed switch (usually SPST) are closed by bringing a small magnet near the switch. They are used in security circuits, for example to check that doors are closed. Standard reed switches are SPST (simple on-off) but SPDT (changeover) versions are also available. Warning: reed switches have a glass body which is easily broken! 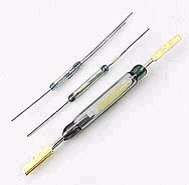 This is a typical simple regulator supply using an LM317Integrated circuit. Zener diodes can also be used to regulate low power to fixed levels.

A relay is an electrically operated switch. Current flowing through the coil of the relay creates a magnetic field which attracts a lever and changes the switch contacts. The coil current can be on or off so relays have two switch positions and they are double throw (changeover) switches. Relays allow one circuit to switch a second circuit which can be completely separate from the first. For example a low voltage battery circuit can use a relay to switch a 230V AC mains circuit. There is no electrical connection inside the relay between the two circuits; the link is magnetic and mechanical.
The coil of a relay passes a relatively large current, typically 30mA for a 12V relay, but it can be as much as 100mA for relays designed to operate from lower voltages. Most ICs (chips) cannot provide this current and a transistor is usually used to amplify the small IC current to the larger value required for the relay coil. The maximum output current for the popular 555 timer IC is 200mA so these devices can supply relay coils directly without amplification.
Relays are usually SPDT or DPDT but they can have many more sets of switch contacts, for example relays with 4 sets of changeover contacts are readily available. For further information about switch contacts and the terms used to describe them please see the page on switches.
Most relays are designed for PCB mounting but you can solder wires directly to the pins providing you take care to avoid melting the plastic case of the relay. 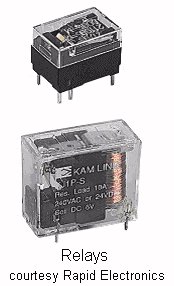 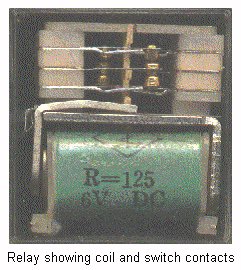 Resistor is the name for an electronic component exhibiting Resistance. Resistance is the property of a component which restricts the flow of electric current. Energy is used up as the voltage across the component drives the current through it and this energy appears as heat in the component. Resistance is measured in ohms, the symbol for ohm is an omega. 1ohm (written 1R0) is quite small for electronics so resistances are often given in 'k' (kilo) and M (meg). 1k = 1,000 (1k0); 1M = 1,000,000 (1M0). Resistors used in electronics can have resistances as low as 0.1ohm or as high as 10M.

A set of resistors combined in one package for convenience in assembling circuits. Often abbreviated to “Resnet”.

A device used to produce an oscillation of a specific frequency, primarily for use as the clock signal for digital circuits.

The Positive voltage goes to the Negative part of a circuit and vice versa.
Used to reverse DC motors in trains.

An analysis of the risks and the method of management in a strategy or practice.

Root Mean Square. This is what you read on an analogue meter used on AC voltage. It compares to the dc level. So it’s an average value.Wikipedia - RMS

It is commonly used in computer serial ports. Is a standard for serial binary data signals connecting between a DTE (Data terminal equipment) and a DCE (Data Circuit-terminating Equipment) https://en.wikipedia.org/wiki/RS-232

It is commonly used in computer serial ports. RS485 enables the configuration of inexpensive local networks and multidrop communications links. It offers high data transmission speeds (35 Mbit/s up to 10 m and 100 kbit/s at 1200 m). Since it uses a differential balanced line over twisted pair (like EIA-422), it can span relatively large distances (up to 4000 feet or just over 1200 metres)