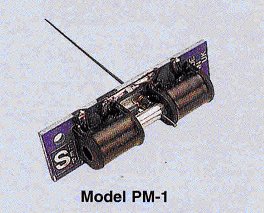 Railway signal giving indications to the train driver by means of the position of a mechanical arm. semaphore

Gives a mechanical output for electrical input. Used extensively in model aeroplanes for controlling flight surfaces, they are now used in MRR as inexpensive point and semaphore motors. They respond to the width of a repetitive electrical control pulse. Servo signal pulses are (normally) repeated every 20 mS and a pulse width ranges from 1.0 mS to 2.0 mS with the servo position being proportional to the pulse width. A normal servo will drive through 90 degrees of movement, but depending on the servo make, more movement can be had by increasing the signal pulse width but this will require modification to the driving circuit. MERG servo driver info is here.

Data received in the chip register is shifted right on the pulse received. One of the most common uses of a shift register is to convert between serial and parallel interfaces

This principle is used in the RPC SRI4 & SRO4modules.

Could be any form of indication to an model railway operator

Serial in Parallel out, refers to a type of Shift Register where data is fed into the device in serial form, one bit at a time, under control of a clock, when data transfer is complete a strobe pulse is applied which causes the new data to appear on the output pins. For a graphic description see Shift in/out.

SLiM (Simple/Small Layout implementation Model) A method of configuring a CBus layout without using a computer, this is achieved using switches which are usually built into the module concerned. Compare FLiM
CBus resources page

Surface Mount Device (SMD) small electronic components designed to be soldered directly onto a Printed Circuit Board (PCB) without the need for holes in the PCB. More information in Wikipedia.

The addition of components to a power supply to reduce peaks in the flow of current .

Category 5e and Category 6 network cable comes in a solid conductor format, and in stranded conductor formats. People often ask which is appropriate for their application. We'll detail the difference between two types of cable, and help you decide which application is suits which cable.
Solid conductor uses 1 solid wire per conductor, so in a standard Cat 5e / Cat 6 4 pair (8 conductors) roll, there would be a total of 8 solid wires. Stranded conductor uses multiple wires wrapped around each other in each conductor, so in a 4 pair (8 conductors) 7 strand roll (typical configuration), there would be a total of 56 wires.
Solid conductor cable is most useful for structured wiring within a building. It is easily punched down onto wall jacks and patch panels since it is a single conductor. The wire seats properly into insulation displacement connector. Solid is less useful when you are terminating with standard RJ45 connectors, as used when making patch cables. Most RJ45 connectors use 2 prongs which penetrate the conductor itself. This is not desirable, since solid cable has the tendency to break when penetrated by the prong. Using a 3 prong style RJ45 connectors creates a much better connection as it doesn't break the conductor - the 3 prongs style connection wraps around the conductor instead of penetrating it. All being said, it is recommended that stranded network cable be used for patch cables - they make better quality RJ45 termination connections than even using 3 prong connectors.
Stranded cable is much less useful for punching down on wall jacks because the strands do not keep their perfect round shape when thrust into an insulation displacement connector. For best results, use solid for wall jacks and stranded for crimp connectors. Stranded cable is typically used to create patch cables. The cable itself is more flexible, and rolls up well. The RJ45 terminators have a better, and more flexible and complete connection to stranded wires than solid wire

This is a type of DCC digital decoder fitted in locomotives to provide appropriate simulated sounds in time with its operation. It can also include motor control or can be an addition to a decoder dedicated to control of the motor. A speaker is attached to reproduce the sound. Some makes can be programmed to receive sound files.

This is the description of the electrical contacts in a switch or relay:

SPROG is a computer based programmer for DCC decoders.
http://www.sprog-dcc.co.uk

This is the description of the electrical contacts in a switch or relay: SP: Single Pole (one wire will be switched) ST: Single Throw (off or 1 contact)

Part of the RPC series of products offered by MERG member Gordon Hopkins. SRI4 provides for the RPC system to read up to 4 Bytes (=32 bits) of logic data for transmission to the remote panel or computer. See TBs in the G16 series

Part of the RPC series of products offered by MERG member Gordon Hopkins. SRO4 provides for the RPC system to write up to 4 Bytes (=32 bits) of relay drive data for transmission to the layout from the remote panel or computer. See TBs in the G16 series

Star Network is a generic term that describes any network that is configured like the rays of light that radiate from a star, that is, there is a centre point and all other points radiate out from the centre.
A Star Network is often recommended for use in the ground system of sensitive equipment, where each separate element is separately connected to the central ground point or 'Star Point', this is done so that individual ground currents do not flow in common wires and thus interfere with each other, probably causing crosstalk which can spoil an HiFi installation with 'Hum' or can cause unreliable operation in a digital system.

'SoD' or 'Start of Day' is a term used to denote a process by which the initial state of a system is established.
In CBUS this is achieved usually by an input module generating an event which other input modules have been taught to recognize as a SoD. In response these other modules generate a set of events representing the current state of their inputs.
A FCU - Supplement page has been created for members to expand on the instructions contained in the FCU User Guide.

For MERG this usually refers to a DCC decoder that is not intended to be mounted in rolling stock.
For example it may be intended for controlling track-side equipment, such as switch machines, signals, uncouplers, lights, level crossings, sound devices etc.

At its most basic a “Stay Alive” consists of a capacitor of fairly large value, a resistor to restrict the charging current and a diode in parallel with the resistor to allow the discharge current to flow unrestricted. These components are connected to the DCC Decoder in such a way as to provide current to the decoder during temporary loss of track contact, thus preventing the decoder's processor from resetting.

This keeps the loco moving across dead spots where it would otherwise have stalled. Some decoders, such as many of the Zimo range, have the resistor and diode incorporated so you just have to connect the capacitor. Some large scale decoders, such as the ESU Loksound 4.0 XL, have keep alive already incorporated into the decoder.

The latest range of “supercaps” with values up in the Farads, can provide a lot of storage such that a loco can keep moving for many seconds without power. Some manufacturers supply “keep alive” units, which are simply capacitor(s) and the resistor/diode packaged together.

Apart from Fred Hoyle's theory of the 'Steady State Universe' in which the density remains constant with time although the Universe is expanding, in electronics we have a simpler viewpoint:
When a process starts, it may cause surges of the working fluids (eg water/steam/electricity); after the initial acceleration the process may be assumed to continue at constant level, or to have reached 'Steady State'.
A good example is a car starting from cold and accelerating from rest to a cruising speed; during acceleration, fuel consumption is high, but this settles to steady state conditions in the cruise and as the entire machine warms up.
For MERG, one explanation for 'Steady State Decoder' is to distinguish it from 'Pulsed Decoder'. The pulsed decoder is usually related to solenoid switch machine, which requires a capacitor discharge device to provide high transient power (maybe 5Amps for 20mS). In contrast, the steady state decoder is intended for non-pulsed functions, such as micromotor operated machines, and can have a lower cost design.

Stranded wire is composed of a bundle of small-gauge wires wrapped in a single piece of insulation to make a larger conductor. Stranded wire is more flexible than a single, thick strand of the same gauge, or crossectional area.
Another form of Stranded Wire is called “Litz wire” which is used in coils that are used as inductors in high-frequency tuned circuits, because at high frequencies electricity travels near the outside of the wire. This is called the skin effect.

This is the Name for a set of ideas and kits started by MERG member JJ Matthews and his team which provides for automation of the principle of block control, observing signal logic and providing smooth accelerations, if required without human intervention.
The TB-33 series describes and Kit #38 to 40 provides the hardware.
Main article
https://merg.org.uk/merg_resources/superbloc.php

In the context of MERG this refers to electronic components that are intended to be mounted directly by being soldered onto the conducting tracks on the surface of a printed circuit board (PCB), usually without drilling any holes. The opposite is 'Through Hole Mounted' in which all the connections pass through the PCB to be soldered on the side opposite to the component.
Working with Surface Mount Devices is discussed in one of the Babani books.

Standard Wire Gauge, this is the Imperial standard for wire gauges, the reference shows a table of sizes for this series and the American similar (but different) table 'AWG'.

1. The simplest is an electrical switch, as in 'Light Switch' which is a mechanically operated device used for connecting (low resistance) or disconnecting (high resistance) electrical circuits. Such switches can have many contacts and become quite complex.

2. Electronic switch such as a transistor, FET or TRIAC. A semi conductor which goes from a very high resistance to a very low resistance when a control input changes.

3. Electro mechanical switch such as a relay or a contactor. A switch operated by a lower powered circuit.

4. American term for a turnout or the English 'Points'…this being the scheme to allow a railway track to diverge or converge with another route. It allows the path of the train to be 'switched' from one route to another.

A switched-mode power supply, switching-mode power supply or SMPS, is an electronic power supply unit (PSU) that incorporates a switching regulator. While a linear regulator maintains the desired output voltage by dissipating excess power in a “pass” power transistor, the SMPS rapidly switches a power transistor between saturation (full on) and cutoff (completely off) with a variable duty cycle whose average is the desired output voltage.
Advantages include smaller size and lighter weight (from the elimination of low frequency transformers which have a high weight) and lower heat generation from the higher efficiency. Disadvantages include greater complexity, the generation of high amplitude, high frequency energy that the low-pass filter must block to avoid electromagnetic interference and a ripple voltage at the switching frequency and the harmonic frequencies thereof