We were given two presentaions at our July meeting.

We were delighted to welcome the Warwick and North Oxford Area Group Leader, Simon West, who offered to talk on the MERG CAB options and particularly what will be the new CANCAB2 kit (Simon is doing the production design and will be the elf) as well as his own slightly larger version. It was a useful opportunity to get further feedback on the new kit version and views on pot operation vs encoder.

An Introduction to Electrical Measuring and Testing.

Also,in the morning David Roberts presented An Introduction to Electrical Measuring and Testing. This talk provided an introduction to electrical and electronic test equipment as applicable to model railway electronics. The equipment discussed ranged from the simple multi-meter to the more specialist devices such as the logic probe and the oscilloscope. The presentation also covered how a Digital Multi Meter (DMM) is used to make various measurements.

And finally we were delighted to welcome back Peter Wilson and the superb cake! Thank you Aileen.

Semaphore experience:  a layman’s guide over many years.

Tony Chamberlain is well versed in semaphore signalling having been invited into a signal box at an early age (the bug never left him). He has recently stepped down from his position as a signalman, on the Severn Valley Railway link here.  Tony's presentation commenced by explaining how railway signalling evolved.   We were shown examples of various types of signals, from a cross Brunel's Great Western. Composition, variations in design and physical locations alongside line side images and track layouts were displayed showing some of the complexities the signal faces where safety is the number 1 priority. Perhaps one of the most intriguing images was that view from Severn Valley Railways Bridgenorth South signal box which is the only one in the country where you can see live elephants!  Elephant by the Track is a new one on me.

David Roberts gave the group a demonstration of three modules he has recently built:

A DCC Loco identifier.  Originally developed by MERG member Duncan Greenwood.  The DCC loco identifier provides functionality that displays a locos identity at a button push.   While the decoder identifier may be built using an Arduino Uno and a motor shield this unit uses one of Duncan’s PCBs. The output is displayed on a 4-row 20 character Liquid Crystal Display (LCD) via an I2C interface.More details can be found here https://www.merg.org.uk/merg_wiki/doku.php?id=projects:locoident

DCC++ EX This is a complete wireless DCC command station built using an Arduino Mega 2560 module linked to a motor driver shield and a wifi module .   This enables you to use either Wi-Fi throttle (iPhone) or Engine driver (android) to operate your layout  https://dcc-ex.com/get-started/index.html . DCC++EX provides a simple and cost effective entry to DCC control.

NB1 booster Based on the MERG Kit. David built his version that also incorporates a RailCom cut out.

So what is Arduino

David Roberts gave a presentation to introduce the Arduino in terms of the hardware most commonly used by the Railway Modeller and the Integrated Development Environment (IDE). A look at Shields and other peripherals is included along with a very brief review of the standard interfaces.

John Fletcher talked about his expeirances since joining MERG

John Gowers gave a presentation about the mechanics of a steam engine. How to capture real sounds and applying them to your model railway

He also showed us how to inserting sound chips into a loco. This was followed by how you configure the captured sounds to the locos movements and actions.

Here are some of the photos from the day. 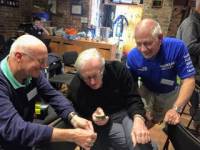 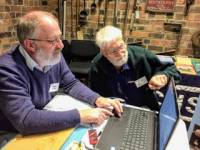 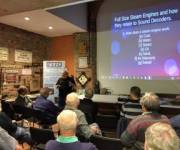 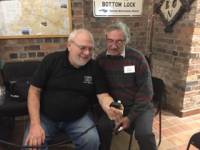 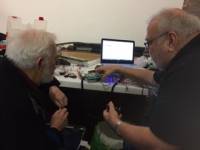 Electrostatic Discharge: What it is and Why it is Important

David Roberts gave a talk on what Electrostatic Discharge is, how it is caused and the damage that it can cause to modern electronic devices and systems. Simple and affordable measures to mitigate the problems will also be described.

The Theory and Practice of a Simple MERG Kit

Here are some images of the day. 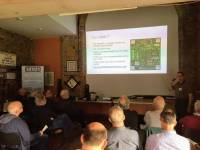 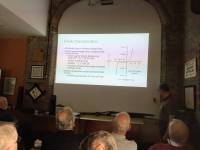 What is Arduino and what can it do for railway modellers

David Thomas presented ‘A CBUS Sound Player’ in which he explained how the project has been inspired by Davy Dick’s sound player (See March 2017 journal and the subsequent threads on the Forum). The set up uses three main components: an MP3 player, an Arduino and a MCP2515 CAN Bus. Using Alan Turners pcb (See PCB section of the knowledgebase) he then went on to explain how he configured the various sounds using FCU and also demonstrated how the whole thing connected together as a CBUS module. Those interested in reading David’s article can find it in Junes 2019 Journal here https://www.merg.org.uk/merg_journal/ .

Tony Jackson gave the second talk entitled ‘A Magnetic Identity’ in which he introduced the use of magnets to obtain the identity of a loco or vehicle (rather than only detecting its presence) to facilitate effective decisions regarding automating aspects of layout operation. Tony explained that by attaching magnets to the base of a loco or vehicle and passing in turn over a linear Hall sensor represented a code that could be configured as a specific identifier. I.e. 6 magnets giving a SSNSNS. Tony then explained how he configured individual locos to establish which is North and then using an Arduino sketch to process the results and display the correct loco or vehicle identifier.

‘Wiring and Power supplies for the Railway Modeller’

The first one, focused on wiring for the railway modeller and included

His second talk was Power Supplies and explored: 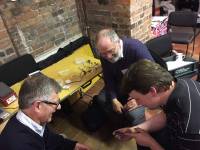 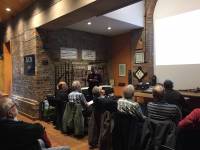 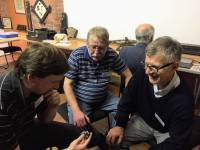 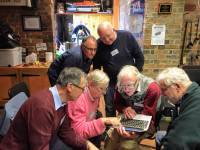 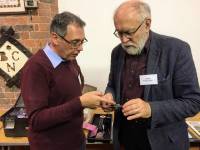 Howard Watkins as our keynote speaker.

The theme of our meeting was ‘Back to Basics’

AM - Two talks given by Howard included

PM - Practical 'HANDS ON' session to include an opportunity to build a track tester,

Back to West Midlands Area Group